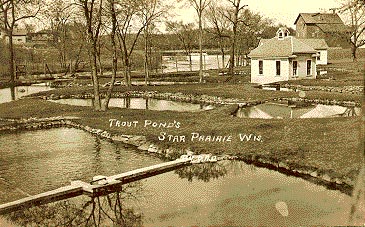 A View on Farm Raised Fish
Aquaculture has come under fire in recent years for many reasons, all relating to its rapid growth in the last decade. While numerous risks arise, as with any new practice or technology, they are largely perceived as potential risks. The horrors of feed-lot terrestrial husbandry really don’t apply at all, or at most, they barely do.

Consider that beef, pork and poultry require from 5 to 20 pounds of feed in order to produce a single pound of ‘on-the-hoof’ animal weight (5-20 : 1 – lbs of feed : lbs of growth). With fish, the feed conversion rate is more like 1.2 lbs of feed to 1lb of growth (1.2 : 1). This ratio can be slightly higher for carnivorous fish, and even less than 1.2 : 1 when conditions are optimal. Consider further that for every ton of live-weight for a terrestrial animal-one that lives on land, the yield of edible meat is tiny compared to most fish. This is especially true when referencing trout and salmon, which can yield up to 85% edible meat. The benefits to the environment and to its huge, hungry, human population are obvious on the input side; less obvious but equally profound on the waste-stream side.

What happens to the other 4 to 20 lbs of feed, that isn’t converted into growth? It turns into manure!Factory feed-lots use manure lagoons, and for terrestrial animals, they need to. If the feed conversion rate is 1.2:1, does that mean fish don’t, uh, make manure? No, they produce waste, just in miniscule amounts, compared to their warm-blooded terrestrial counterparts. This makes ‘nutrient management’ easier for fish farmers, despite the challenges of containment in aquatic environments. To this remarkable efficiency, add an equally high degree of ‘purity control’. Exceptionally high water quality is required for fish culture, and it behooves the fish farmer to work to maintain and improve it and usually, to reuse it. As astounding as it may sound, discharge water from well-run fish farms is actually cleaner than the receiving water!

Fish farming enhances the environment, contrary to what rabble-rousing big green NGO’s would have you believe. Polyculture with shellfish culture is even more unbelievable – Nutrient solids in the discharge stream from fish farms nourish the shellfish, which, as filters, further clean the water, while adding to the human food supply. Hydroponic or ‘aquaponic’ agriculture sited downstream works similarly – nutrients are used again, reduced while converting to food for consumers.

In a world fascinated by new science and technology and price-driven enough to disregard anything more lasting than the bottom line, risks of mismanagement on fish farms do exist. Potential risks become real problems whenever scale of production outstrips sustainability of resources or when sensible practice is replaced by cutting corners. Middlemen’s greed drives prices to farmers down; down prices in turn force farmers to cut corners, with fish as with any other commodity. The engines of biotechnology – of hormones and gene-splicing, are also driven by markets that trim margins to a hair’s breadth and base profits on huge volumes – all contrary to sense and sustainability. The way out is local purchasing from small, locally-involved farms, where human ecology includes animal and vegetable food production, harmoniously coexisting. The middleman is then put out to pasture, and farms can be profitable and eco-logical all at the same time.  Farmers can again be the vanguards of stewardship that Wendell Berry, Aldo Leopold, and John Muir knew. They are the ‘lost generation’ of fish farmers who idealistically pursued their calling for all the right environmental reasons, who can now receive respectful due from the greenies who abandoned them. That old New Alchemy is still viable. Easy to say for a rarified minority of the world’s population. The real question remains: who will feed the 7 billion? The deck is stacked against the farmer who attempts to fill that volume, while economies squeeze from both sides and aesthetes criticize.